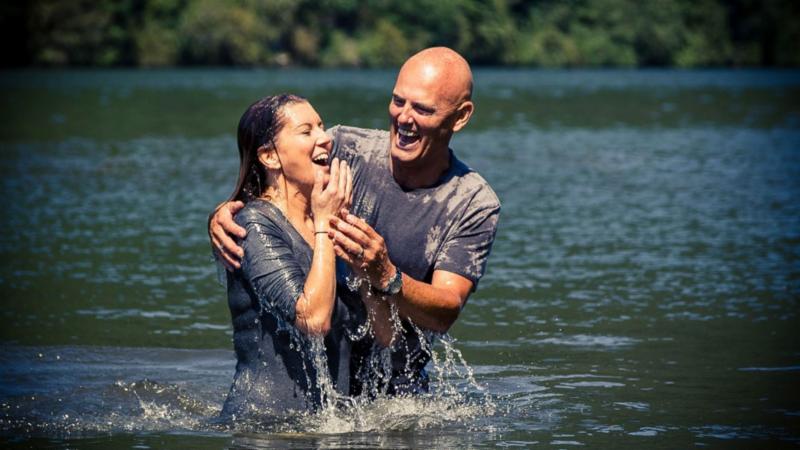 Brother JL Pipkin who was the founding pastor of the Blue Mountain Church of the Lord Jesus Christ in Blue Mountain, Mississippi is our guest author for this newsletter. He was also one of the founders of the Blue Mountain Children’s Home. Brother Pipkin passed away in 1995. This article was written for a local newspaper years ago. This is the second time we have featured an article by Brother Pipkin. Please listen to this profound reasoning from the Word of God:

Unto What Were You Baptized?

There has been much controversy over water baptism. Some have even dispensed with it altogether. But the Bible does teach that this is part of a genuine Christian experience. In Acts 10:47, it is written, ‘‘Can any man forbid water that these should not be baptized?’’

How was baptism administered- by sprinkling, pouring or immersion? Acts 8:38 tells us, ‘‘Philip and the eunuch both went down into the water.’’ The next verse says, ‘‘They came up out of the water.’’ The baptism had taken place in the water, not merely using it. Romans 6:4 says, ‘‘We are buried with Christ by baptism unto death.’’ Both emphasize the necessity of immersion.

History bears out this fact. The World Book Encyclopedia tells us ‘‘at first all baptism was by complete immersion.’’ The Catholic Encyclopedia says that in the early centuries, all were baptized by immersion in streams, pools and baptistries.

The question is asked, ‘‘Does it make a difference how you are baptized, as long as you are sincere?’’ Would a loving God condemn a man who had never been baptized if that man was sincere? The Bible answer is this: Your obedience to the commandments of God is proof of your sincerity. The sincere hearted person will be constantly endeavoring to find a deeper walk with Jesus Christ. It is a wonderful privilege to prove our sincerity to God by obeying his commandments.

How can we discover the proper formula for baptism? Let us suppose that there were no denominations today. Suppose that the only source of information was the Bible. When we look into the New Testament, we quickly discover how a person should be baptized. One of the most successful sermons ever preached is recorded in the Book of Acts, chapter two. Peter preached this message on the day of Pentecost. As a result, 3,000 converts were won to Christianity. The audience cried out in conviction, ‘‘Men and brethren, what shall we do?’’

This was a vital moment. Jesus had given Peter the keys to the Kingdom. The wrong answer would not only lead 3,000 people astray, but also millions who would follow in the centuries to come. Verse 38 gives us Peter’s answer, ‘‘Repent, and be baptized every one of you, in the name of Jesus Christ for the remission of sins, and ye shall receive the gift of the Holy Ghost.’’ So the first Christian baptism was in the name of Jesus Christ.

The apostle Paul established the Ephesian church. Acts 19:5 says, ‘‘they were baptized in the name of the Lord Jesus.’’ Every record of baptismal formula in Acts is in complete harmony.

Secular history reveals that the use of the name of Jesus Christ in baptism is so thoroughly established in historical record that it is more than theory- it is a fact.

An authoritative professor of theology at Southern Baptist Theological Seminary in Louisville, Kentucky, was asked this question: ‘‘What was the New Testament baptismal formula?’’ His well qualified answer was, ‘‘They baptized in the name of Jesus Christ.’’

Another noted authority is the Hastings Encyclopedia of Religion. It tells us plainly that baptism was administered in the name of Jesus until many years after the day of Pentecost. This is such an established historical fact that the Britannica Encyclopedia stated that, ‘‘Everywhere in the oldest sources it states that baptism took place in the name of Jesus Christ.’’ Britannica further stresses that the baptismal formula was changed from the name of Jesus Christ to the words, ‘‘Father, Son and Holy Ghost,’’ by the Catholic Church in the second century.

A third important reason for baptism in the name of Jesus Christ is that it brings to light many other scriptural truths. One of these truths is that Jesus or Jehovah is the name by which God has revealed Himself. A major misunderstanding centers around the passage in Matthew 28:19. Here Jesus said, ‘‘baptizing them in the name of the Father, and of the Son, and of the Holy Ghost.’’ The mistaken idea is that Father, Son and Holy Ghost are the ‘‘names’’ of God. But the Bible does not use ‘‘Father, Son or Holy Ghost’’ as proper names. Zechariah 14:9 says there is ‘‘One Lord, and his name one.’’

The Bible makes it clear that the name is one and the same! Jesus said in John 5:43, he was come in his Father’s name. He said in John 14:26 that the Holy Ghost would be sent in the same name- His Name! In Exodus 6:3, the Lord said his name was Jehovah. God used the name ‘‘Jehovah’’ to reveal Himself to the human race. He showed that He is JehovahJireh, the Lord will provide. He is JehovahRapha, the Lord that healeth. He is Jesus, or Jehovah the Savior!

Unto what then were you baptized? The question is very important. ‘‘For there is none other name under heaven given among men whereby we must be saved.’’ (Acts 4:12)